An End to the Robust Metro Phoenix "Seller's Market"?

The last 2 years, 2012 & 2013 were much better years than sellers had seen since the housing bust. While multiple offers and sales for over list price were common even though we hadn't regained all the ground we'd lost since ~2006, sellers who had been watching from the sidelines had the opportunity to sell and move on.

New data signals those seller- slanted days may be winding down. According to the folks at the Cromford Report, our area "go to" for all stats real estate, the number of days on market it took before a seller got a contract that resulted in a sale, increased from 59 days in September to 77 days as of Monday, 1/27/14. 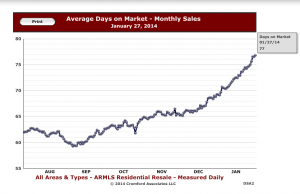 Before you sellers start getting anxious and outright bearish, it may be that we are returning to... gasp... a "Balanced" or normal market. With as much turmoil as we've seen in the last decade, we're seeing pace and pricing that is more commensurate with what we saw in ~2003 or 2004. Many of the areas of the valley have already returned to a balanced market and in some cases we're seeing a buyer's market again. As of today, the only major cities that appears to still be able to boast a seller's market (on Cromford Market index of over 100) are Sun Lakes (117.3), Chandler (113.9), Anthem (112.6), Paradise Valley (108), Sun City West (108) & Avondale (105).

That's OK... It means that instead of getting to call all the shots or at the other end of the pendulum taking whatever you can get. Both buyers and sellers will have to negotiate for what they want.  Listings may sit on the market a little longer. You may have to put a little elbow grease into your home before you list it to leave a lasting impression with buyers. You may have to court your potential buyers, but this might really be an end to the madness and a return to a little bit of decency. While it may take a little more effort, that's still a good thing.