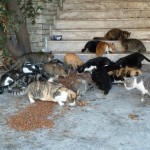 Yesterday afternoon I patted myself on the back for negotiating the sweetest deal in the Willo Historic District for some clients. It was on a lot and a half (12,000SF) so there would be room for their boys to play, a future pool addition AND a future home addition. It had a 2-car garage! There was no funky guest house and it had "good bones". It was a no-brainer conventional loan with a large down payment, no concessions and a 30-day close. Easy deal. What could go wrong...

On the way out, my clients met some of the neighbors who they chatted with. I always suggest that buyers learn as much as they can about any neighborhood where they're considering making a purchase. In conversation, it came up that the neighbor to the east has a large number of cats. Their initial thought was more curiosity than anything and the wife went to investigate for herself by ringing the doorbell to introduce herself and try to make friends with the neighbor.

This woman was very warm to my clients, but my client did notice several cats about. She asked questions about the cats and whether the cats were out and about regularly or went into the yard. The neighbor's responses were vague- not implying that anything was out of the ordinary.

At one point, the sweet old lady made the comment, "I don't care what anyone says, he (the seller) is not moving because of these cats. He just moves every few years." It was an odd statement considering that the seller had lived in the house for 11 years. Another thing the 1st set of neighbors said to my clients was that the seller had taken some of her beloved cats out to the desert (purely hearsay- can't be confirmed).

My clients weren’t completely dissuaded, but weren’t convinced it was no big deal either. I spoke with them about their concerns and discussed options to figure out how to proceed. I honestly had never encountered a "Cat Lady" house to this magnitude, so I advised the buyers to continue to do their due diligence- play Sherlock Holmes, talk to anyone and everyone in/around the house & neighborhood, call the Willo Neighborhood Association, Google it, etc.

Determined to get more info, I reached out to my colleagues in local, closed Facebook REALTOR group asking if anyone else had any similar experiences to share with helpful suggestions. I got lots of opinions and insight. Here's what I heard back:

Another agent sent me a private message:

"Read your post on the Willow Cat Women. I'm a third generation Roosevelt District resident. My family has been in our house since the early 30s. That said, keep in mind every neighborhood has "one of those neighbors." Historic neighborhoods have had them for decades. Willow is one of the more preferred of the districts.

If your buyers plan on living for the long term they should buy. Eventually the nuisances eventually move or die. This appears harsh and callous but is true. We've had plenty of them during the roughly 80 years we've been here. It took a long time for this area to return to where it is now. Not likely to devolve into its previous less-than-desirable neighborhood it once was. And keep in mind Willow residents are very active in keeping their streets and homes in the best of conditions. Hope this helps."

I shared every last comment with them. The wife called the Neighborhood Association office and mentioned her concerns to see if the association was aware of or familiar with the house and owner. The person she spoke to was… I believe the phrase she uttered was "oh... that house." On the way home from work, the husband drove by the house to see whether he saw cats all over the place and opted to drive in the alley behind the house to get a different perspective.

During 4 separate showings on different days, we really only saw 1 big black cat on 2 different occasions. My client stopped to take a look over the wall and saw 12 cats laying about sunning themselves and walking around. That's just what he saw... and then the smell was a bit uncomfortable to him. Despite a very public “Trap, Neuter, Return” (TNR) program effort in the Willo Historic District, it was just more than they wanted to take on themselves.

As painful as it was to give up on "the dream" I pulled the plug at 7:30P last night, sending the agent this written message, "We wish it could be different, but they had so many dreams for this house that didn’t include the potential of having a lot of furry guests. We wish you and the seller the best of luck with the sale and know that someone else will see the value to move past the cats and buy it." C'est la vie. There's always another one.

The takeaway: You can fix a house- make it pretty, change the yard, or the kitchen. You cant change the neighbors, the busy street nearby or bus stop on the corner, the power lines behind the house or the apartment or office building hovering above the backyard.

What drives you to buy a home may not be in your best interests. That's why there's a due diligence period (10 days is standard). It's not just about inspecting the roof for leaks or checking the plumbing lines- there is so much more that goes into making a house a home. You have to decide what you can live with and what is a deal-breaker, but you have to do all of this BEFORE you sign on the dotted line and move in. It doesn't matter what anyone else likes, YOU have to live there and pay for it.

This weekend, think about the things that you love and hate about your home and think about whether if you had to do it again whether you would have made the same choices... TGIF!

The Downside of Making a Lowball Offer in a Seller's Market