Drab to Fab: The Evolution of a Home in Scottsdale, 85254

Have you ever walked into a house that you thought you wanted to buy and wondered, "What in the world? Why did the sellers do THAT?!"

I've been a REALTOR® for almost a decade in Phoenix & Scottsdale. I think I hear that at least once from every buyer who buys a home from me. Sometimes it's because of a bad paint or flooring choice. Sometimes, it's a component of the house where the plan was to do one thing, but the execution didn't quite turn out right. Other times, the buyers and I just scratch our heads and say "It's not even worth the effort to ponder it. Let's just move on."

In July of 2011, I listed a bank-owned home, which I regularly did.  The house had some great features- large, 14,000SF lot, custom or semi-custom construction, coveted 85254 zip code with a Scottsdale address & Phoenix taxes, diving pool, 3-car garage, RV gate & parking and a great location that fed into Horizon High School. However, it was almost completely original & desperately needed TLC. Constructed in 1985, it felt every bit of its age: 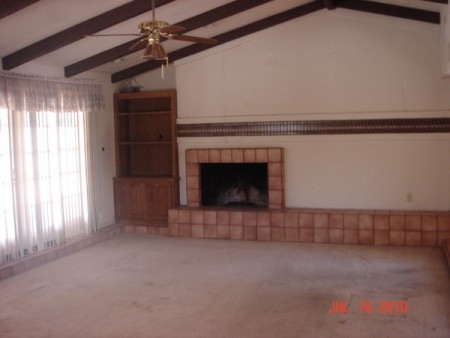 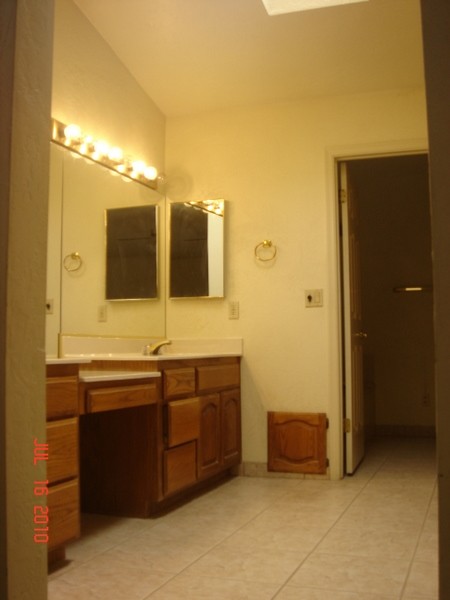 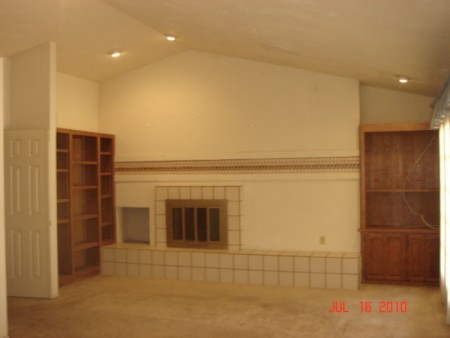 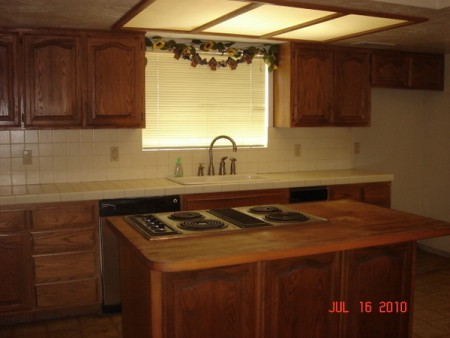 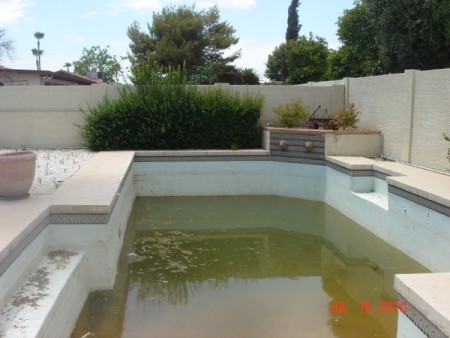 Ironically, the home had belonged to a contractor/builder who invested heavily in building spec homes, which ultimately cost him his own home. So I did what I usually did, a value analysis to determine whether the home was better "as-is" or "repaired", determined what repair costs were and set out to make the case for one or the other. Side note: home sales fell off a cliff in July right as I took the listing and stayed that way until the end of Q1 2011.

I recommended that the seller refloor most of the home, repaint the interior, make some drywall repairs, treat for termites & repair a roof leak in a bedroom- to the tune of about $11,000. We completed the repairs and put the home on the market. Initially, after some dismal showing feedback including many comments about the swampy pool, the seller opted to replaster it- another $3,800 cost. After the pool repairs, showing activity got slightly better: 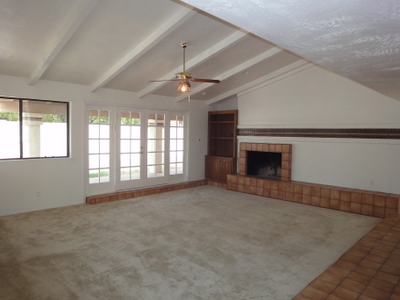 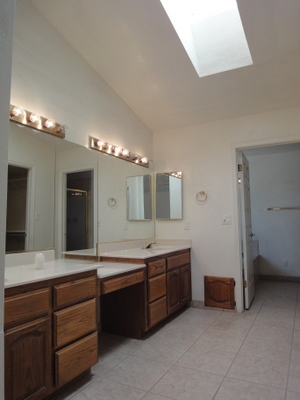 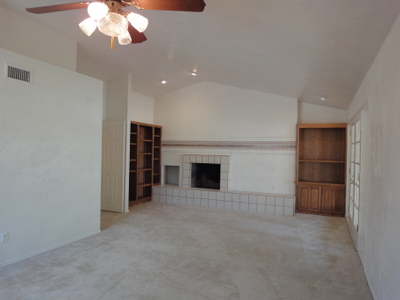 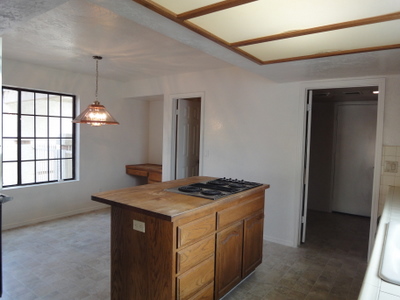 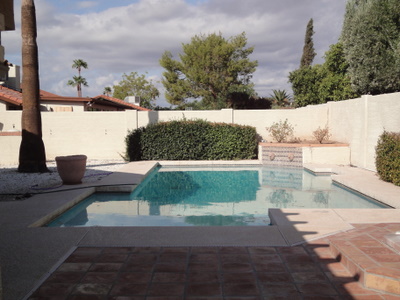 Finally, in December I got an offer. After the buyer completed all his inspections, he buyer backed out in January. About 10 days later, he changed his mind and wanted to buy it after all. But, before he could resubmit his offer, a very brave woman made her offer on the house and the bank accepted it. She saw the potential I did when I first laid eyes on it. After a lengthy purchase process which included a low appraisal, and some repairs that the lender-required repairs, she became the owner of the home in early April 2011. Please note: I was not the buyer's agent. I represented the seller ONLY.

Nearly a year after the buyer bought the house, she contacted me and we exchanged some emails about contractor referrals and remodeling woes- I was in the midst of my own major home renovations. In June of 2014, she asked if I would be willing to come take a look at her progress and give some insight on a few more decisions so she could decide to sell or lease her house. When I got there, I was pleasantly surprised. She had done so much to the house that I barely recognized it! 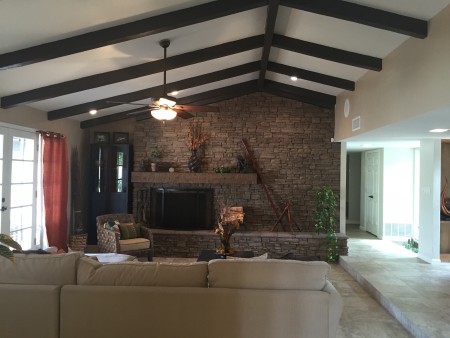 The flooring that was installed just prior to her purchase had been torn out and replaced- large tile in the living areas & baths & gorgeous tiger's wood in the bedrooms. The fireplace surrounds in the great room & master bedroom were refaced with  floor-to-ceiling stone. The master bath had a new, full-length vanity cabinets, granite counters, new oversized tub, shower surround & glass enclosure. Both the master & Jack-and-Jill bath baths were completely redone with granite counters, new faucet & light fixtures.

As we headed toward to the kitchen, I gleefully imagined what I would see when she said, "I haven't done anything to the kitchen..." and I thought to myself "she's so modest!!" When I got there, she wasn't kidding... the kitchen was almost exactly the same as when I sold it years before. After putting so much effort into the rest of the house, she just hadn't gotten around to it. I could empathize- she had a very hectic career which also included a heavy travel schedule. Living through renovations is hard enough, but not being around to see what's happening day-to-day, makes it risky. We concluded my visit by discussed the pros and cons of leasing vs selling.

I went home and prepared both sets of comps. For a sale, I did the same analysis I had done 4 years before for "as-is" vs "repaired". My recommendations were not to fix much, other than the cooktop, if she wanted to lease it. At the time she had only 2 working burners, which isn't an issue for road warriors, but is usually a deal-breaker for tenants. That would be a relatively small cost though. Overall, the house was quite nice and I worried whether the gorgeous wood floors would be easily scratched or any of the other upgrades she did would be damaged by a tenant, who might not take the same care of a home the way most owners would.

Even despite a weakening market, there was a lot of opportunity in the market to sell it. But the completely original kitchen, down to the older electric coil cooktop & trash compactor, would make it a tough sell. Repairing the kitchen to make it comparable to the rest of the home, would be the best option to maximize sale profits.

After leaning toward leasing her home, she purchased a home warranty in place to help with any potential repairs a tenant might need. Then once more, she weighed the opportunity vs cost of fixing the kitchen. Two months later in August, we met a general contractor at the house to discuss what renovations she was considering and estimate the repair costs. I hoped we could renovate for under $10K, but the bid came back at a little over $14K. Despite the higher price tag, the difference in value between "as-is" & "repaired" was substantial- a $25K-40K return, depending on the overall quality at completion.

After putting the decision off for a few more months, the market around her house started to show signs of life in the fall. A few homes in her neighborhood sold for substantially more than I had originally estimated the value of her home to be. After more consideration and several more revised bids for the renovations, she opted to renovate her kitchen to modernize it for a sale. The estimated cost is about $15K.

The reno plans are to:

This is what the kitchen looked like the morning that demo officially started: 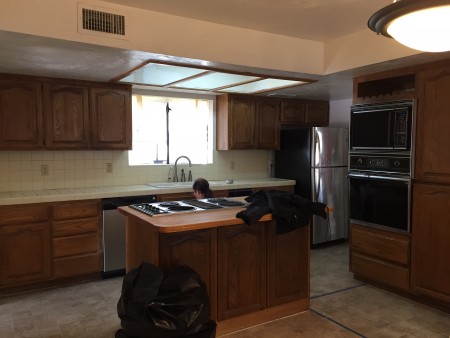 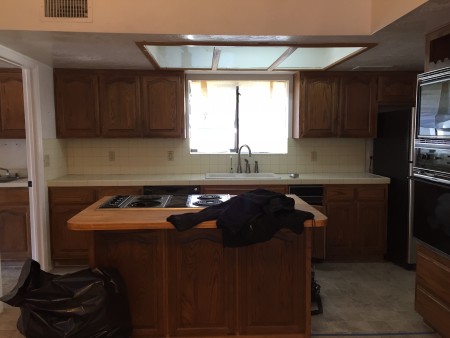 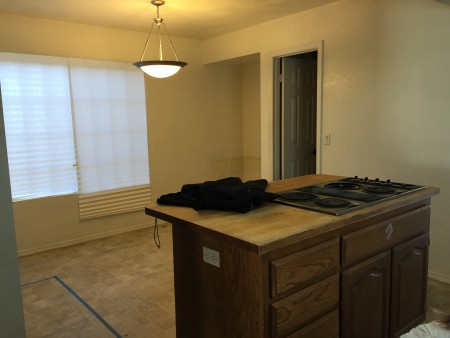 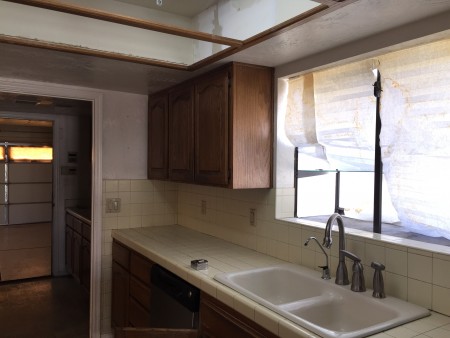 This project is the definition of the concept of "designing to sell". We will tear this kitchen apart and put it back together to make it a great space, for someone else to buy the home and enjoy. In about 2 weeks, lots of exciting things will happen here. I won't give away all the details, but our goal is to list it by the end of March 2015 (this month). Stick around and see just how much can be done to make this kitchen match the luster of the rest of the house and make it a home that someone will want to live in.

Along the way, we may look for some input to make decisions about materials to bring the broadest level of appeal to potential buyers. Please look out for updates and requests for feedback on my Facebook Page & on my Pinterest Board.

Follow Camille Swanson, PC, REALTOR®'s board Drab to Fab: The Evolution of a Home in Scottsdale, 85254 on Pinterest.

When the work is complete, I hope you will enjoy having seen the process from start to finish to see just how the right changes can make a dramatic impact on the sale of a home.

One. Happy. Seller. The paint was barely dry and the photos barely processed when we listed this house for sale at $490K on 5/22/15- Memorial Day weekend. We had showings immediately, an open house with 40+ groups of visitors through and were able to pick up 2 cash offers by 5/26. We closed the sale on 6/29/15 for $480K cash.  The house actually closed before her bill was due and payable... not bad. 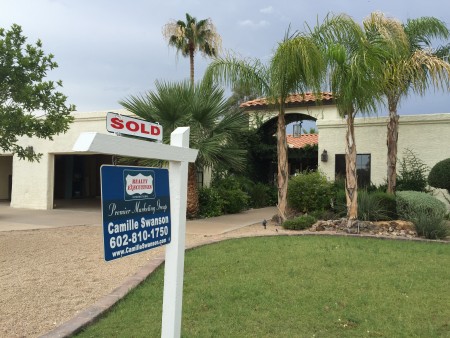 Several others got the same treatment. If you'd like to know you can have similar success, call/text/email me and we can work up a customized plan just for you and your homes!

Drab to Fab in Scottsdale, 85254: What Color Cabinets

Drab to Fab in Scottsdale, 85254: Which Pendants Over the Island?

The Downside of Making a Lowball Offer in a Seller's Market