Gains Starting to "Trickle Up" in Phoenix & Scottsdale Real Estate

Summer has been very good to sellers this year in the Valley of the Sun. The growth that initially took shape with the "starter" range close to our median area price of $220,000 is moving through the "move-up" range ($300-500K) and flowed nicely into the lower rungs on the luxury ladder.

August 8 - Luxury single-family home sales in the Northeast Valley remained surprisingly strong during July 2015. There were 354 closed transactions over $500,000 in the Northeast Valley though ARMLS, up 25% from last year. Almost all the strength was concentrated in ranges below $1 million. Over $1 million, sales were up only 2% while between $800,000 and $1 million sales rose an astonishing 69%. The top end went suddenly quiet with only 5 closed sales over $3 million, down from 16 in June. Unit sales over $500,000 were the second highest we have seen for any July since 2000 with July 2005 still holding the record at 479.

The swing away from the very top end to the ranges between $500,000 and $1 million is one factor that negatively affected the overall average $/SF during July.

Though the ultra-luxury market actually did quite well at the end of last year with December posting some big gains, homes between $1-2M didn't quite have the same activity. A 69% increase in homes between $800K-1M is substantial.

For most buyers trying to get into the "core" areas of our metro around which most the more established residential and commercial areas are found, it hasn't been that easy to snap up a home. Take a look at where all sales in the last 180 days occurred in Maricopa County. 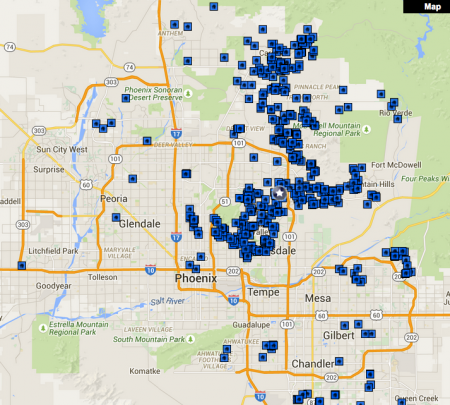 Notice the majority of the sales activity is confined to 1 quadrant of our metro area- the northeast valley, inclusive of N. Central Phoenix, Arcadia, the Biltmore, McCormick Ranch, Paradise Valley, Scottsdale Ranch, the East Shea Corridor, DC Ranch, Pinnacle Peak/Grayhawk areas of North Scottsdale, Cave Creek & Carefree. Nearly one half (209, to be exact) of all 457 sales occurred in the area from Central Ave (west) to 150th St (east) and from McDowell Rd (south) to the 101FWY (north).

An interesting point to note is that many of these areas already have high median home prices even though these stats include ALL types- SFR, condo, townhome, etc. The median sale price in:

So, just as sales volume under-$200K market are decreasing, sales between $800K-$1M within these areas also may decline in this price point and lead to an increase in sales volume at just above $1M. This is food for thought if you're planning to sell a home in the range of $1M. Call me to talk about what you can do to be ready to sell and maximize your proceeds.

If you plan to buy a home in the range of $1M in the next 6 months, you'll need to make sure the home you think you can buy today will still cost the same within 6 months. If the answer appears to be no, you may want to get serious and think about purchasing now, prepare to spend more or be willing to accept less.

Either way, call me to ensure you have the best representation and we'll craft a strategy just for you! Have a great week!