2015 was a good year for real estate in the Valley of the Sun. We went out on a high note- sales were up across the board & luxury sales picked up a bit in December. Here's how the year looks so far from a basic economics perspective of Supply. (Demand/pending sales aren't usually great during the holidays). 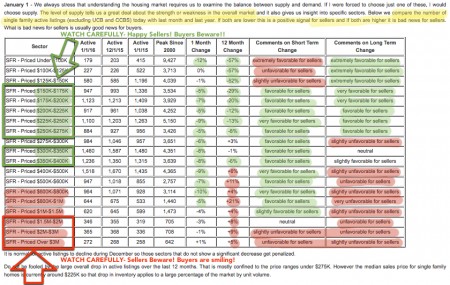 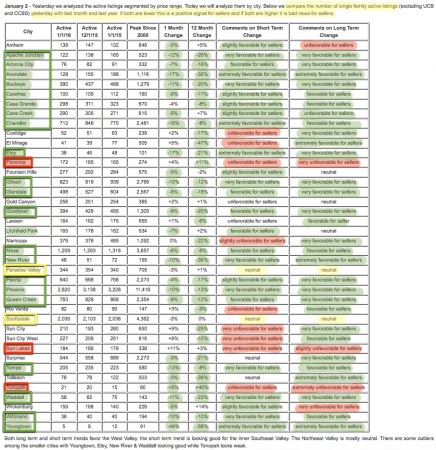 To really drive the point home, here's one more chart:

Something happened to the demand for luxury homes... Supply is up, sales are down and pricing is headed backwards...

Here's one more tidbit... from the Cromford Report:

"January 12 - December was a great month for the housing market with particularly strong closings for new homes. Overall sales were up almost 15% from the previous December, while new home closings jumped 45% year on year. So I was rather expecting January to follow through with some positive signs. January is much better than January 2015, but not so much as to generate a lot of excitement.

For the first 12 days, we have closed sales up 8% while pending listings are up by 11%, compared to a year ago. The contract ratio has reached 40.1 as opposed to the 31.2 we saw on Jan 12, 2015. The current contract ratio is as good as we saw on Feb 9, 2015. These are all good positive signs, but if anything they are slightly disappointing after such a strong December. It is possible that December's numbers were boosted by lenders and title companies doing some catching up with closing delayed by TRIS, so the comparison is probably not entirely fair.

It really looks like we may have to wait until February before we know whether 2016 is going to move well above 2015's activity levels."

Builders, post recession, have had better luck with higher-end new builds. There are plenty of resales out there (for the most part), but buyers LOVE their new homes in Phoenix. Let's think about it a little more...

Higher end new home sales, lots of high end inventory. This will definitely be something to watch over the next month or so. Last year it was obvious how much buyers LOVED the pretty new remodels that shifted from the earthy, warm tans & browns to the light, bright grays and whites. I think I might know where this is going... Stay tuned for more!