From February to March, we saw a huge jump in the Cromford Market Index. This index takes the temperature of our real estate market and says how "hot" or "cold" the market really is. It seems odd to me, but at the time I didn't question it. Here's what happened:

Back in December 2012 when short sales were the norm and it took multiple buyers/contracts to actually complete the sale of a home, the UCB status (Under Contract- accepting Backup offers) was created to be able to keep marketing a home to solicit back-up offers while noting that the home actually had an active purchase contract. However, as short sales decreased and there was less concern that a listing would no longer need many back-up options to sell, agents didn't change the way they reported the listing status. Then, instead of changing the status to pending when a contract was accepted which would remove the listing from MLS & syndicated sites like Zillow & Trulia, agents began to use the status infinitely from contract acceptance to closing to maintain their online visibility.

As a result, this skewed key statistics and artificially inflated the amount of time it took to sell a home, the amount of available inventory and ultimately the pending sales index, a key indicator of market trends. This chart they published on 2/27/15 does a better job of showing how UCB is being abused: 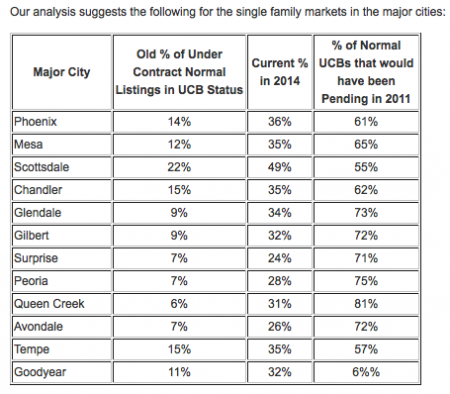 At the end of February, the Cromford Report economists & analysis took a good hard look at the numbers and realized that the pending sales statistics did not seem representative of the changes going on. At that time, they recalibrated the data all the way back to December 2012 to account for likely reality of the UCB status.

In Scottsdale alone, 22% of UCB listings should have been in "Pending" status, but were marked "UCB" and thus worsened the perspective of the market for sellers. The real story is that we've been in relatively balanced territory since before Q4 2014, but after the recalibration, it became much easier to see the market legitimately changing:

Our market in Metro Phoenix (Maricopa County) is flirting with being a "Frenzied" market threshold at 130.