Q1 2015 is already done. Across Maricopa County, many cities in the Phoenix Metro are seeing dramatic improvements over the last 12 months. I've broken down the finer points of what's happening in our market so you can know exactly what's going on without needing to go very far. Here's how it shakes out (look for key info in bold words):

Here's a breakdown of the buyers who are driving our market.

In years prior, from about 2009 on, investors represented a huge portion of closed sales transactions. We knew they left roughly in 2012 in search of better profit margins as our market's property values started recovering. But even today, their presence in the market is decreasing. Overall investor sales are down 13%

On the flip side of that, primary owners are making a large portion of the increase in sales. Owner-occupied purchases are up 23%. Second home buyers are also improving the market- sales to 2nd home owners are up 9%.

The market is shifting definitively in the favor of sellers. Over the last month or so, I've been talking about the increase in pending sales and actual closed sales. Here is the tally for the month of March, as compared with March 2014. If you'll recall, last spring was very lackluster and the market had seen little improvement (with exception) until late last year. Now, it's quite a different tune.

So, if you're thinking about selling and have an asking price between $300K-400K and $500K-600K, you probably will have lots of reason to celebrate! At this point, lots of sellers have good reason to downright happy! If you feel bad for those sellers with homes in the middle of this price point sandwich, don't. I have 2 homes in Scottsdale (85254 & McCormick Ranch) that I will list toward the end of this month in this price range that already have buyers clamoring to get in and see them in the absence of other options.

This chart shows which major cities in the Phoenix Metro area are seeing an improvement, as measured by the Cromford Market Index. There are some big gains occurring. 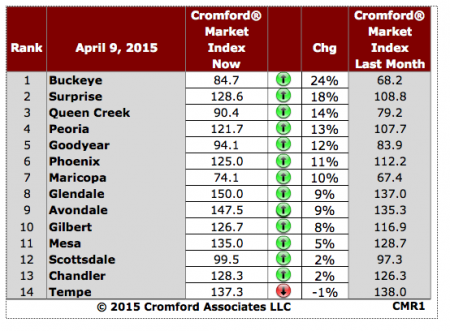 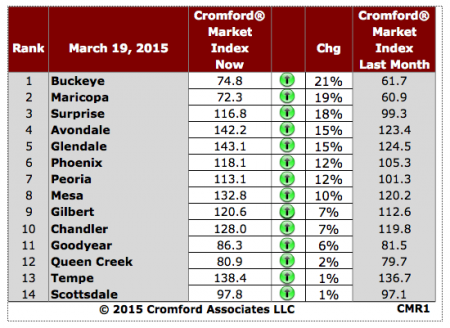 Between 90-110 is a balanced market with 100 being the middle point. Below 90 would be approaching a buyer's market, with 85 a declared "Buyer's Market". Above 110 approaches a "Seller's Market" with an index of 130 being declared a "frenzied" Seller's Market. You remember those... multiple offers in hours or days of going on the market, waiving or shortening inspections and/or appraisals

The majority of the 14 major cities in our area are "Seller's Markets, except Buckeye, Queen Creek, Goodyear, Maricopa and Scottsdale. AND there are 4 Frenzy markets (Glendale, Avondale, Mesa & Tempe)?? Considering that of these major cities, Scottsdale also boasts the highest number of luxury homes... many likely falling into the crowded $1M-2M space, so this may not be that too hard to fathom.

If you're curious just how far we've come in a year, take a look at this chart: 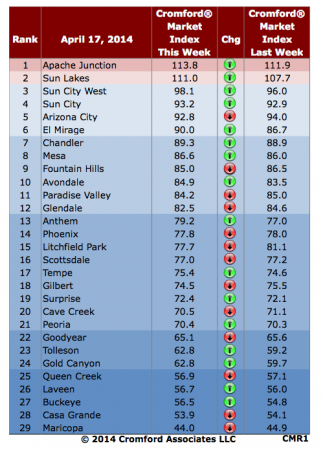 All but 2 of the 29 cities in our Metro area were balanced or in "Buyer's Market" territory...

Despite the recalibration of Cromford Report stats after altering how pending sales with UCB status are viewed in our market, it became easier to see the trend that was taking place. 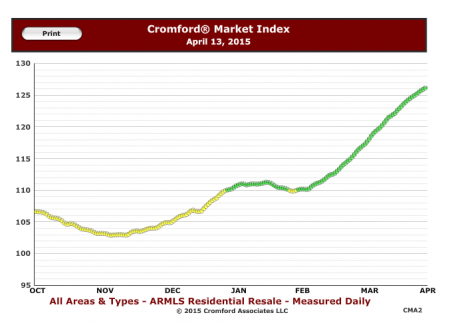 For a better "big picture" perspective: 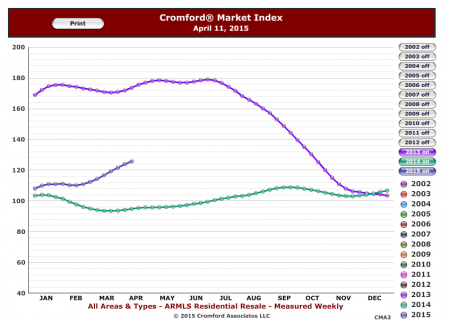 In one word? Demand. Look at the chart below and see how the number of pending sales have increased over 2014, Specifically between the ranges of $150K-600K. This is the bulk of the "entry-level" and "move-up" market. They are currently driving the growth we're seeing. 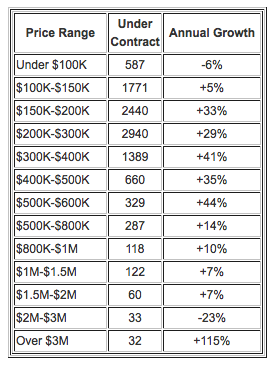 Buyers are feeling less hesitant about jobs and their ability to finance a home. Younger buyers are coming into the market realizing that paying rent isn't always the best option. Buyers coming off of short sales, foreclosures and bankruptcies are coming to the market and people who had put off selling or buying a home for various reasons are deciding they are ready to take the plunge.

Theoretically, entry-level buyers allow the move-up buyers to be able to move on the next home in their stage of life, and so on. It's a "trickle up" theory. So now as our spring goes on and we watch inventory start to evaporate, but there are still buyers out there with a mission, this is where things start to get interesting. There's a fine balance between Buyers continuing to search for homes and staying undeterred by things like higher interest rates, the ability to afford a home and live somewhere they feel is desirable and the time that Sellers realize they can ask what they want for their home and still have buyers willing to pay their price. As long as this delicate dance keeps going, we have an active market. If either of those 2 sides break down due to external factors we'll start to see a shift followed by a new trend.

If the supply (decreasing) and demand (increasing) keep on their current track, before long we'll see prices start to respond to upward pressure. This will make things very interesting for both buyers and sellers alike.

Keep in mind, real estate is hyper local. If you'd like to know just how these numbers affect you or your plans to buy or sell a home, please text/call or email me for detailed snapshot and I'll get you the information you need to be dangerous!

Stay cool It's getting warm out there!!

Which Phoenix Scottsdale Area Sellers are Doing the Happy Dance?