Plan on selling your home this spring in the Valley of the Sun?

After a year or 2 of record low inventory, things are changing. Namely, more people are deciding the time is right to sell their home too. With a myriad of new listings coming on the market, how do you make YOUR home stand out against the competition?  There are lots of ways to do it. You can refresh your home with something as simple as a new coat of paint (in or outside) or you can take on a simple remodel to appeal to buyers wishes and wants.

After the housing crash put tens of thousands of homes in much less than perfect condition on the market, buyers want more. Those sitting on the sidelines have been watching HGTV for the past 5 years watching "Love it or List It", "The Property Brothers" or "House Hunters". As exciting as all the remodeling projects look, the reality is that the majority of buyers though they realize the value in home improvement, neither have the time, nor the money to really tackle those projects themselves. So, the home that has as many of the features in their bucket list as they can get, is usually the winner.  The practical side of it is that it costs a lot less to finance $10-50K of improvements in a first mortgage than it does to save that money or borrow it after the fact.

What's an informed seller to do? Make some improvements. Here are some examples of homes I've listed and sold with improvements. Take a look at the "before and afters" and decide for yourself:

In June of 2007, I listed a pretty updated home with craftsman elements on a larger lot in Scottsdale's 85254 zip code.

While there were lots of things to love, like a remodeled kitchen, 1/3AC lot with a pool and a charming rear yard complete with a 3-tier fountain, most buyers just didn't love the paint: 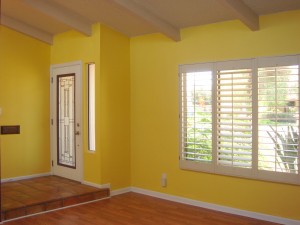 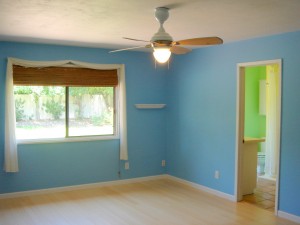 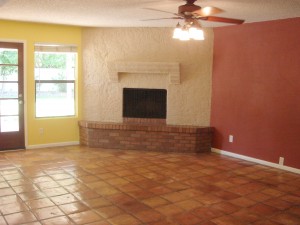 My client loved the self-expression in her home, but after months of feedback saying repeatedly that buyers couldn't get over the myriad of colors (even with me photo-shopping my pictures trying to "plant a seed" of what the home could look like), I convinced her to spend $2100 to repaint them: 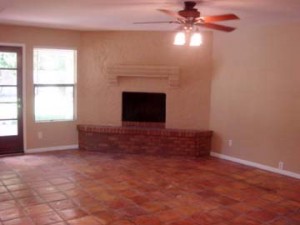 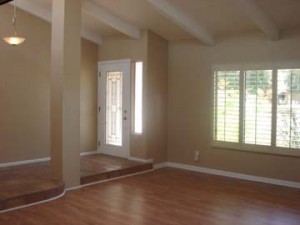 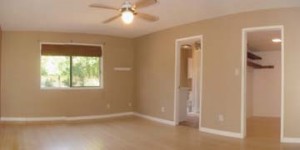 It was still tough to sell the home in a declining market, buy we succeeded not too much longer after repainting. It was just much easier to convince a buyer after the primary objection had been removed. And even though paint is really easy to remedy, you'd be surprised at the number of buyers who are so blinded by bad paint that they can't see anything else the home might have to offer. Mind you today, there is a whole new palette of neutrals that is far beyond the tan and beige that has dominated our market for a long time.  Grays, putties & shades of white are extremely easy to match and have taken new life in our marketplace. Here is some inspiration: Benjamin Moore- Color Trends 2014

We spent $4,000 to repaint/repair a few walls & ceilings, add some new appliances, some more landscape rock to fill in thin areas and new recessed (indoor) & landscape (outdoor) lighting. I had no idea whether it would work, but at the end of the day, if it didn't sell, I knew I'd like living in my own home a whole lot more. 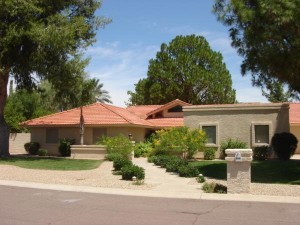 We cranked up the water on our sprinklers, added a few tons of landscape rock and replaced the dated and broken landscape lights & post lights. 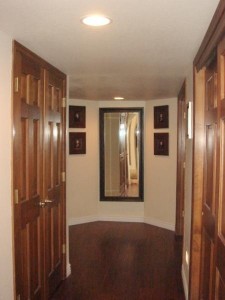 This L-shaped hallway felt like a dungeon even with 2 floor lights (very mid-80's) and it was nearly impossible to see into what was actually a lot of hall closet storage, so we added 3 recessed lights and a mirror at the end of it to reflect the new found light and added a few pictures to tie it all together. 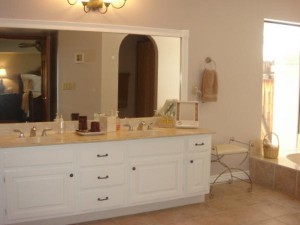 In the master bath, we primered our dingy white sink vanity and painted on a coat of glossy white to the cabinet base and the trim around the mirror. I don't think we even changed the hardware and note the still-pretty-ugly cultured marble top which now contrasted with the white kind of looked like travertine (kinda). Finally, we spent a modest few hundred dollars for a stager to come in and add/remove a few items and spice up the overall decor (yes, you don't have to spend thousands on staging your home when it's already furnished).

The results you ask? We sold our home in 4 days (June 2009). The "For Sale" sign never made it up. The first buyers that saw it stayed over an hour and loved it. We ultimately sold our house for $20K more than we bought it for in August 2004. We could have eeked out another $10K from our buyers, but we had no house to move to.  So I wrote in contingencies giving us the right cancel the contract if we didn't have another home to close by an agreed upon date, which the buyers kindly extended... twice for a total period of about 45 days!  The convenience factor of that alone was worth it to us and we were able to complete the sale without a hitch.

In 2010, at what we thought was the height of the crash, I helped an investor purchase an absolutely disgusting bank-owned property in Arcadia Lite (Phoenix, 85018) that we aptly nicknamed the "Dog House" because of the smell and various other attributes.

My client spent $70K to renovate this home before putting it on the market about 7 months later. He replaced the roof, gutted the home back to the studs and had a 200SF addition permitted to increase the size of the home. When we listed it, the number one complaint? The kitchen. See for yourself. 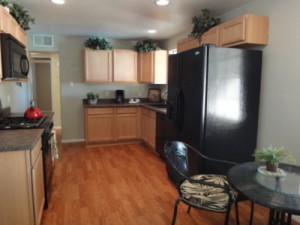 It  was all brand new, but what buyers hated was it was boring... nothing really to look at. Natural maple cabinets, laminate counters, no backsplash. There was nothing that made anyone want to stay in there for any period of time or rush out and tell their friends all about.

Let's face it. Kitchens and baths sell homes. If they don't sell them, they can hurt the sale of a home because they are some of the more expensive items to fix with home renovations. After much feedback from buyers that the kitchen was ugly and pleading with my investor to make some specific changes, $2000 later, here's what we had: 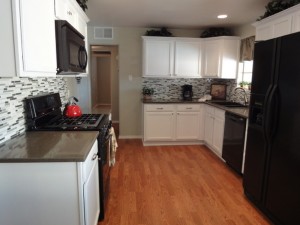 We added crown molding to the cabinet uppers, sprayed them with a few coats of white paint, added cabinet hardware and installed quartz counter tops.

Which kitchen would you rather have?

We actually got an offer shortly after this, but my client ultimately decided to rent it for 2 years before making a mint on it at the end of 2013.

(I do have additional examples of what a coat of paint can do to cabinets and how it can dramatically change the look of a kitchen or bathroom- I'm happy to share them, upon request.)

Some other clients bought a home in NE Phoenix mountain preserve neighborhood (85028) when they relocated here from San Diego for work in the spring of 2009.

A year later in 2010, they had to relocate AGAIN to the bay area. The market was still pretty soft, but they had to minimize the loss for holding the home for such a short period of time given the costs of moving and selling expenses as possible to justify the move back across state lines. Even though an unexpected pregnancy kept them from making any inside improvements, the interior of the home was in pretty good shape.  However, their backyard was very neglected. It was essentially a giant dust bowl that their adorable dog, Bitsy, had a blast in. 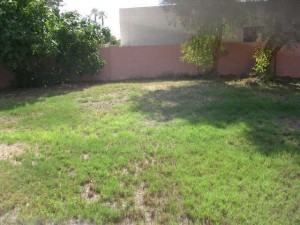 Knowing it would be a huge selling point for a potential buyer, I convinced them to spend $1500 to resod their back yard. Reluctantly they agreed. 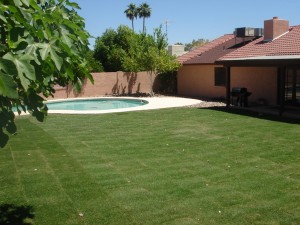 I sold it in 19 days for only $10K less than they had paid for it a year earlier even though the market continued to decline. Considering we were mid-housing crash, they were happy to keep their losses low.

I have many more examples where other clients did the same thing with dramatic before and afters. The bottom line is, it DOES pay to improve your home before you sell it in any market. BUT I don't always recommend making lots of improvements. There are situations that warrant doing nothing at all. In the fall of 2012, I had a client who had a gorgeous little home in the heart of Scottsdale (85250) that was in great shape. She wanted to swap out her existing stainless steel kitchen appliances and front loading washer/dryer with newer models to make it shine even more. I talked her out of it.  The impact would have been minimal and the cost was thousands of dollars to accomplish. Good thing we didn't- I was able to sell it in 20 days and we closed with 96% of the original list price. I actually believe the buyer would have paid more for it, but my client, an extremely generous woman who was just eager to move on, simply chose not to push the envelope.

It makes sense to consult your REALTOR® (me!) prior to listing. This way, you will determine which features buyers want, and determine which improvements will bring the biggest bank for your buck.  I'm only a phone call away and can help you navigate this too!

8 Steps to Price Your Home For a Quick Sale